The Five Image Channels in an AFM 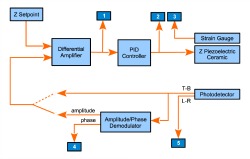 In AFMWorkshop's Atomic Force Microscopes (AFMs) - as with almost all AFMs - there are typically up to five image channels that may be displayed while scanning a sample. This article is written to help users gain a greater understanding of each channel. Each of the AFM's 5 image channels is derived from the Z feedback loop (Figure 1) that utilizes the output of a photodetector to control the motion of a piezoelectric ceramic.

In Figure 1, the photodetector output measures the motion of a cantilever/probe. This output is then used to activate the Z piezoelectric ceramic which controls the spatial relationship between the probe and the sample. In non-vibrating (contact) mode, the photodetector's Top-Bottom signal (T-B) is sent to a differential amplifier, and in vibrating (tapping) mode, the average vibrating amplitude of the cantilever is sent to the differential amplifier. The output of the differential amplifier, called the error signal is then passed through a proportional, integral, derivative (PID) controller. The PID controller output activates the Z piezoelectric ceramic.

For more information on the Z Feedback Loop, you might review AFMWorkshop's animated online tutorials, and for more details about an AFM's five image channels, we recommend Atomic Force Microscopy from Oxford University Press.