1. How does Atomic Force Microscopy Work?

2. What is the resolution of an Atomic Force Microscope?

3. How are AFM images displayed?

4. What is the difference between Contact and Tapping AFM?

5. What is Phase Mode imaging?

6. How does Lateral Force Microscopy work?

7. Why are Force-Distance curves important?

9. How long does an AFM probe last?

10. What is the difference between AFM and SEM?

11. How much does an Atomic Force Microscope Cost?

1. How does Atomic Force Microscopy Work?

In an atomic force microscope(AFM) a sharp probe is mechanically scanned across a surface and the motion of the probe is captured with a computer. The probe's motion is then used to create a three dimensional image of the surface. In the AFM either the probe can be scanned over a stationary surface(tip scanning AFM), or the sample can be scanned under a stationary probe(sample scanning AFM). The primary components in an AFM are illustrated in Figure 1.

2. What is the resolution of an Atomic Force Microscope?

Forces between the probe and surface can be as low as a few pico-Newtons, so very sharp probes with a few nanometers diameter can be used. Thus, in an atomic force microscope horizontal resolutions of a few nanometers are possible. In the vertical dimension, an atomic force microscope can have a resolution (or noise floor) of less than 35 picometers.

3. How are AFM images displayed?

Image processing software such as Gwyddion is used for displaying AFM images. Images can be displayed in a 2-dimensional or 3-dimensional format. Most AFM images are displayed with a color scale such that a specific color indicates the height of a feature on a surface. Alternatively, images can be displayed with a light shading format to give a photo-realistic appearance. Figure 2 illustrates a 2-D, 3-D and light shaded image of a SiC sample having atomic steps. 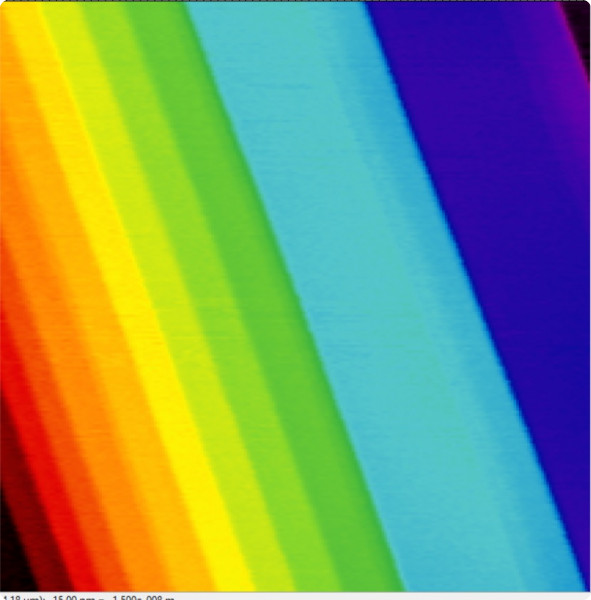 4. What is the difference between Contact and Tapping AFM?

Figure 3
Top - In contact mode AFM, when the probe interacts with a surface, the cantilever bends. The force between the probe and surface is proportional to the deflection of the cantilever. When scanning a sample, the cantilever deflection remains constant.
Bottom - In tapping(vibrating) mode AFM when the vibrating probe interacts with the surface, the vibrating amplitude is reduced. The amount of force between the probe and surface is related to the reduction in vibration amplitude. The vibration amplitude is held constant while scanning across a surface.

5. What is Phase Mode imaging?

Phase mode imaging is used to measure the differences in hardness of the sample surface and is commonly used for measuring images of polymer samples. A phase difference between oscillation of the cantilever and of the signal that drives cantilever oscillation (by, for example, piezoelectric crystal) is measured and visualized in phase imaging. There is no phase contrast when the surface is homogeneous, or when there is no interaction between the tip and surface (i.e., the cantilever is well above the surface). However, if specific regions of the surface have distinct mechanical properties, that could be captured with phase imaging. This is because the cantilever loses a different amount of energy as the probe contacts surface areas with differing mechanical properties. Hence, phase imaging could be helpful to detect variations in mechanical properties such as friction, adhesion, and viscoelasticity on surfaces. It can also be used to detect patterns of various materials such as polymers on the surface or to identify contaminants that cannot be distinguished with topography imaging.

Figure 4
In a phase mode image the phase of a vibrating cantilever is measured. A change in the phase signal is related to a change in the hardness in differing regions on a samples surface.

6. How does Lateral Force Microscopy work?

In lateral force or frictional force microscopy, lateral deflections of the cantilever, arising due to forces parallel to the plane of the sample surface such as friction force, are measured. This allows the technique to detect inhomogeneities on the material which gives rise to variations in surface friction.

7. Why are Force-Distance curves important? 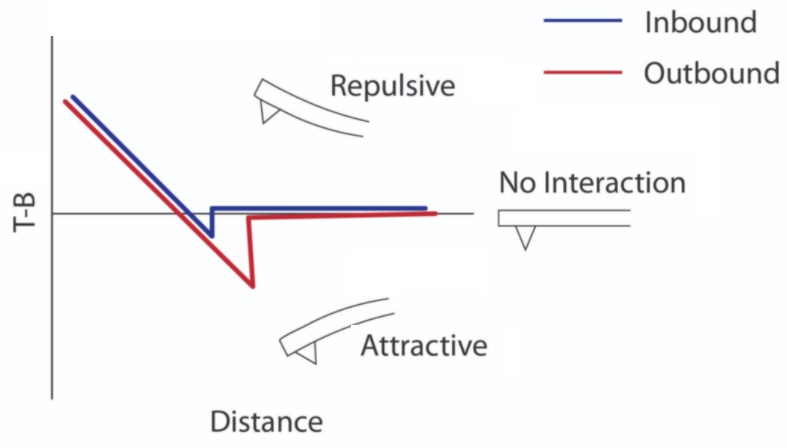 Learning to operate an AFM requires about the same amount of effort as learning how to drive a car. After a few hours of training on AFM operation and theory a new user can start measuring images. For measuring extremely high resolution images, an operator must master the probe approach and PID optimization steps. There are 7 steps required to measure an AFM:

7. Retract the probe from the sample

Changing AFM probes- AFM operators must learn how to change probes in an AFM. This video shows how to exchange the probe on an AFM. It typically takes less than 2 minutes to change a probe.

Measuring Images-As the probe is scanned back and forth across a surface, the motion of the probe is displayed on a computer screen. An image of a surface is created line by line with an AFM.

9. How long does an AFM probe last?

A new AFM operator that is learning how to change probes and measure AFM images may use one probe a day for the first few days. Sometimes, while learning, a probe gets dropped on the floor and cannot be used for measuring AFM images. Once the basic skills are mastered, for routine applications, a probe may last for a week or two. There are two times the probe tip can be broken: a) During probe approach if the probe crashes into the surface, and b) While scanning if the Z feedback parameters are not optimal.

10. What is the difference between AFM and SEM?

To address imaging surface structures, the scanning electron microscope (SEM) and atomic force microscope (AFM) have complementary capabilities. SEMs have fantastic depth of field, and are capable of imaging structures that have a strong vertical relief. AFMs have poor depth of field, but provide amazing contrast on flat samples. The unique capabilities of the SEM and AFM are demonstrated in such extreme examples as the SEM's ability to image a fly's head, and the AFM's ability to image structures on polished silicon.

11. How much does an Atomic Force Microscope Cost?

An AFM for general laboratory use costs between $20,000 and $300,000. The amount that the AFM costs depends on the features and capabilities of the instruments.

Typically, AFMs costing less than $30,000 are used for educating students on the operation and application of AFM. The mid price systems are purchased by researchers wanting AFM imaging capabilities but do not want to be AFM experts. Instruments costing more than $100,000 are purchased by experts that require advance capabilities.

Atomic Force Microscopes (AFMs) are the most accessible platform for educators who want to help students understand the importance of visualizing, measuring and manipulating nanostructures. AFMWorkshop's unique combination of hands-on AFM tools and AFM education resources can greatly assist students who anticipate careers in variety of STEM fields.

The AFMWorkshop Learning Center provides helpful resources for both new and long-term AFM users. It also provides assistance to those evaluating the potential of an atomic force microscope for their application.

Back to Learning Center