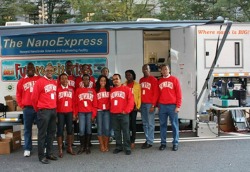 Talk to enough researchers using AFMs and you'll get a sense of excitement about the future, along with a dose of frustration about the slow pace of AFM adoption and market application of research results.

Innovative educators are looking to expose younger users to AFM potential when addressing these issues, and companies like AFMWorkshop are making the technology more affordable to service this wider user group. A bonus for everyone lies in potentially breaking through some traditional STEM education barriers for young people around the globe.

One example is Howard University in Washington, D.C., where Dr. Gary Harris is thinking "K to Grey" when designing his outreach programs for the Howard Nanoscale Science and Engineering Facility (HNF). The particular focus is, according to Dr. Harris, "turning kids on to science. We think this represents the future. It's something most kids don't get an opportunity to be involved in; so that's our basic thinking and what we're trying to do."

Dr. Harris explains: "We use the TT AFM as an educational tool in our mobile lab. It's a 48-foot trailer that goes up and down the East Coast to give kids a real hands-on experience in the nanotechnology arena. We have a number of fairly sophisticated pieces of equipment onboard and 150 desktop experiments we can set up on the table outside. Our goal is to bring nanotechnology in particular to students; real applications on instruments that typically no high school can afford. Over the years we've averaged just over 10,000 visitors to the lab annually." 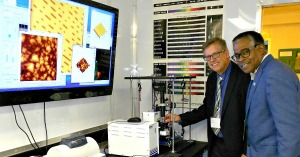 Dr. Harris conceived of the idea for the Howard "Nano Express" mobile facility after frustrations developed when trying to let students tour and use the Howard Nanoscale Facility. "We were trying... but there was always some sort of timing or other conflict. But if we could deliver the lab to them, it would make it more convenient to them, and provide the same experience. With the Nano Express we've been able to go as far south as Orlando, Florida and as far north as Pittsburgh and Boston."

One super-sized venue for the Nano-Express is the USA Science & Engineering Festival; the USA's only national science festival, which took place in Washington D.C. and drew over 325,000 participants in 2014.

Howard University's HNF was in on the ground floor of planning the first USA Science and Engineering Festival in 2010, and remains an active participant. Their Nano Express lab pulls right up into Festival grounds, adding a wealth of experiments to the Festival's more than 3,000 hands-on activities. Long lines of students and parents eagerly await their turn to enter the lab where they can see,touch and learn about the AFM along with other Nano Express instrumentation. "One of the AFM demonstrations gives students a chance to look at the patterns on a CD disk: you should hear them 'ooh and ahhh.' The AFM does a great job of that" said Dr. Harris. The Festival also provides an amazing, albeit exhausting, opportunity for Howard's students to share their AFM experience and nanotechnology knowledge with young people.

"I continue to be overwhelmed by the popularity of the Festival and the role we play in encouraging the next generation of scientists and engineers," said Larry Bock, serial entrepreneur and Festival co-founder.

In 2014, the USA Festival introduced a new pre-festival event called X-STEM: the Extreme STEM Symposium, as a full day for smaller, more in-depth TED-type talks with middle and high school groups. Dr. Paul West, founder of AFMWorkshop, participated in the X-STEM symposium as one of its "Nifty 50" presenters. The Nifty 50 are described by event organizers as "a group of visionaries who aim to empower and inspire kids about careers in (STEM)." The 50 presenters organized talks and hands-on opportunities for their student audiences, and are on-call for additional presentations to X-STEM designated schools in the metropolitan D.C. Area. In Dr. West's presentations to students about Atomic Force Microscopy, everyone had a chance to handle the TT AFM and deepen their awareness about the realities, possibilities, and fictions surrounding AFMs and nanotechnology.

Says Dr. West: "I love talking about AFMs and nanotechnology with kids. They have some fresh perspectives to share and aren't afraid to voice their enthusiasm. To make progress in nanotechnology, we all need to help kids stay in touch with their creative energy."