A large number of applications for force-distance (F-D) curves have been developed. One of the most frequently used applications are what is known as nanoindentation measurements. In this mode, stiffness or other viscoelastic properties of a material can be measured. Since AFM probes are so small, it is possible to measure these properties within very small samples, as well as form a "stiffness map" with nanoscale resolution. F-D curves can alternatively be used to determine the force of adhesionbetween a colloidal probe and a sample surface. This can be useful for measuring the force of interaction between different molecules including antibodies and antigens. This method is often referred to as force spectroscopy, as a range of interaction forces are typically obtained. This idea can be extended to measure interactions between molecules immobilized on the probe and a cell surface, the interaction forces between two cells, or even to probe protein unfolding.

There are three stages to consider when designing force-distance experiments:

The following sections of this newsletter will explain each of these steps in greater detail. 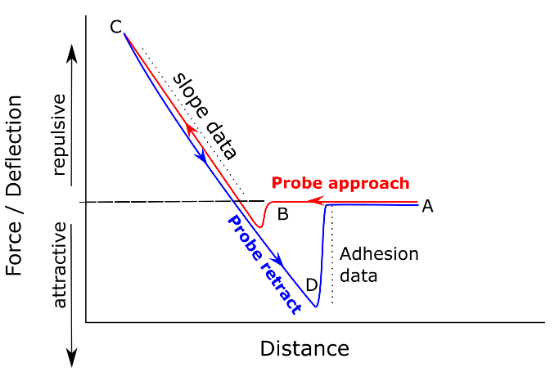 One of the most important considerations is choosing which probe to use for your experiment. For most experiments there are two primary parameters to keep in mind: the spring constant of the cantilever, and the probe tip shape. For nanoindentation measurements, the spring constant should be be similar to that of the sample. For example, a stiff probe will push through very soft materials without deflecting at all, and is more appropriate for stiffer samples. Alternatively for force spectroscopy (adhesion measurements), highly flexible cantilevers are typically used in order to maximize sensitivity.

For nanoindentation experiments in particular, the shape of the probe tip is extremely important, as the most accurate results will be obtained by using a probe with a well-known shape, such as colloidal probes. The size of the probe tip is also to be taken into consideration; if very small features are to be probed, or if a high-resolution mapping experiment is to be carried out, a sharp tip similar to those used for imaging scans should be used. However, for very soft or sensitive materials, or heterogeneous samples where averaging is important, a larger micron-scale probe could be used.

Colloidal probes for these experiments can be bought ready-made from some vendors, or can be prepared in-house. For force spectroscopy measurements, normal probes are typically used, although some preparation is usually carried out for the experiment. 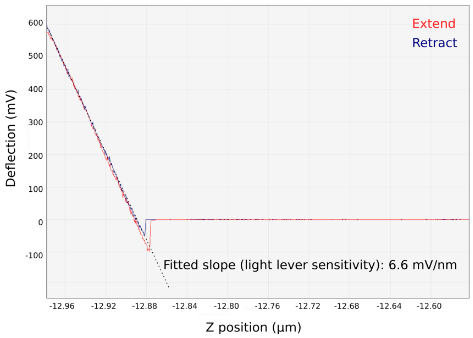 Figure 2: A straight line is fitted to the slope of a force curve to determine light lever sensitivity.

Possibly the most accurate is the use of a laser vibrometer, however this is a rather expensive instrument. One commonly used method is based on determining the thermal noise-induced vibration. Lastly, a simple and very popular method is the so-called Sader method, which is based on the known cantilever geometry and measuring the quality factor of the oscillation resonance. AFMWorkshop supplies an applet that is able to perform this calibration. Typically, cantilever spring constants fall in the range of 100s of piconewtons.

Force-distance curve maps, also known as layered imaging or force volume, can be used to obtain a large number of F-D curves on a sample, which is normally required for statistically significant results. In materials science, F-D maps can be used to determine the distribution of different components in a composite material. In biology, F-D maps can be useful in determining the distribution of receptors on a cell surface.

In this mode, the software sets a grid of points across a predetermined area, and a F-D curve is measured at each point. This can even be useful as an imaging method since lateral forces are completely eliminated, and is especially useful for very delicate or sensitive samples. For force mapping, it is advised to obtain one or more single F-D curves before measuring an F-D map, in order to optimize the F-D curve conditions. Measuring force-distance maps can be time-consuming, depending on parameters including resolution and speed.

Force distance curves will display a number of different features depending on the sample, probe, and probing environment. By looking at Figure 5 below, we can see that these force-distance curves look quite different than the F-D curve schematic in Figure 1, as well as the calibration curve shown in Figure 2. 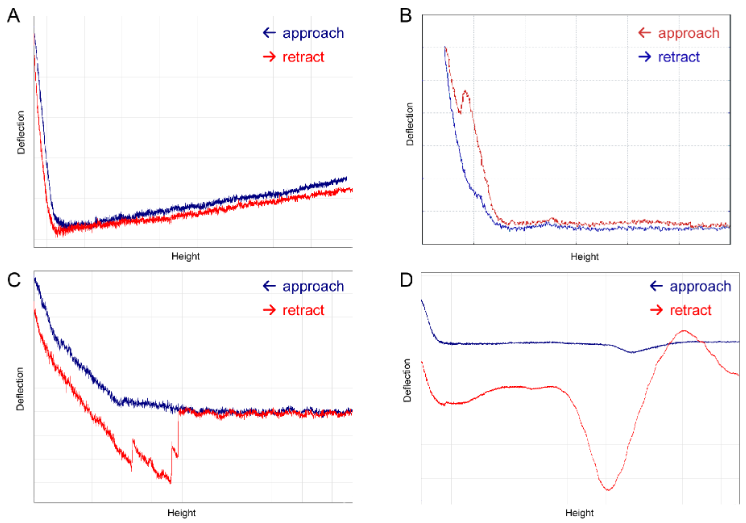 Figure 5: A number of different "non-standard" force curves. Some of these curves represent problems in the experimental setup, while others illustrate unusual sample behavior.

In Figure 5A, the slope of the rightmost part of the curve is not horizontal. This can be due to laser interference, poor sample grounding, thermal drift, or other long range probe-sample forces. To overcome the common issue of a tilted baseline (the normally flat, linear part of the curve where the probe is far away from the sample), a baseline fitting can be performed. This operation simply fits a straight line to remove this tilt. The resulting horizontal line is typically set to be at a force of zero newtons (0 nN). The baseline fitting operation is shown below in Figure 6.

Figure 6: Baseline removal operation is shown. On the left is the raw data; on the right is the same data after baseline fitting. This step is important for all subsequent analysis.

In Figure 5B, there is a discontinuity on the upwards slope section of the curve, where the probe is indenting into the sample (the approach curve). This indicates a break-through of some material on the sample, or possibly a force-induced movement of a sample feature. For example when studying lipid bilayers, this feature of the F-D curve can be used to confirm the presence of of a bilayer, or even to study properties of the bilayer.

In Figure 5C, on the other hand, the retract curve displays unusual features. There appear to be multiple "pull-off" events of various sizes. This particular curve was measured in an experiment measuring cell-cell adhesion, and reflects multiple receptor pairs that the two cells made, and were subsequently broken during the retraction part of the measurement. Another feature to note is that the retract curve is separated from the approach curve. This could be due to viscous behavior of the cell, as biological materials rarely show ideal elastic behavior.

In Figure 5D, we see an unusual transient event in the retract curve, possibly caused by something passing through the laser path during measurement. This particular curve was measured in liquid, and it could have been a floating cell or another piece of debris passing through the laser beam, disrupting the measurement of the F-D curve. In situations like this, the user will typically discard the curve as the event can affect the the analysis of the curve.

In processing force distance curves, there are several steps commonly applied to all curves, while some other steps are used only for certain kinds of experiments. 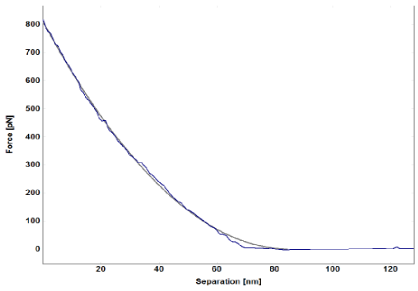 Figure 7: Fitting to nanoindentation data.
Data is plotted in blue, and the fitting in gray.

The first step is the calibration of raw data using the measured values of the light lever sensitivity and the cantilever spring constant (as described above). AFMWorkshop's Advanced Force Distance package makes this quite easy. Once calibration of the raw data is complete, the F-D curves will be displayed and saved in force rather than deflection of the cantilever. The second step is to take into account the cantilever bending, and convert piezo extension into distance. Additionally, as mentioned above, many F-D curves display tilted baselines, and the correction by baseline fitting is required to analyze data properly. In general, the most common types of experiments include nanoindentation and adhesion. In nanoindentation measurements, the approach curve is analyzed; in adhesion experiments, the retract curve is analyzed.

The first step in analysis for nanoindentation is to determine the contact point (the point at which contact with the surface is first made). For stiff samples, this is easy to determine; it can be a bit trickier for soft or composite materials including cells.

In order to determine the Young's modulus of a sample, the curve is modeled using an extension of the Hertz model (appropriate for a rounded tip such as a colloidal probe), or the cone model(Sneddon's law) for pyramidal or sharp probe tips. Several other variables are needed in order to complete the modeling, including the Poisson's ratio of the material (estimates can be found online or in scientific literature), as well as the geometry of the probe. Figure 7 shows an example of a fitting to nanoindentation data. The resulting fit tells us the Young's modulus of the sample is 61 kPa, matching literature values for a 5% agarose gel.

In adhesion experiments, factors measured are usually total adhesion and work done. Adhesion can be obtained by simply measuring the height (in Newtons) of the pull-off feature of the F-D curve. The work done is measured as the area of the adhesion portion of the curve below the 0 nN baseline. These measurements are shown in Figure 8. More complex analysis can be required in certain cases, for example to measure protein unfolding, fitting to a work-like-chain model is usually used; or cell-cell adhesion, determination of multiple pull-off forces can be carried out. 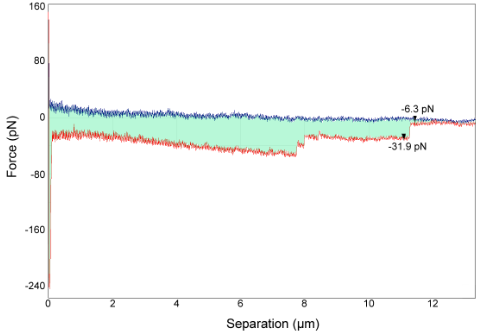 Figure 8: The green area shows the total energy of the interaction (0.562 fJ), while the difference between the two markers shows the adhesion force for an individual step (25.6 pN).

Typically in a run of 100 F-D curves, 5-25% of the curves will be rejected by the user due to heterogeneities in the sample composition, probe alterations, or transient fluctuations in the probing environment.

Measurement of force-distance curves adds a wealth of possibilities when using an atomic force microscope for a large (and growing) number of scientific and technical fields. It is imperative to pay close attention when planning experiments, considering the correct probe, and determining the type of probe-modification needed. Data analysis is equally important, and should be carried out with attention to detail as it can be a time consuming process. Overall these methods greatly increase the power and expand the use of atomic force microscopes. To read the full report, click the PDF link below.