Atomic force microscopes are capable of making measurements on biological samples at the nanoscale that are difficult or even impossible with any other type of microscope. AFM allows the nanoscale imaging of soft biomaterials including cells and DNA in both ambient atmospheric conditions as well as liquid environments, Examples of biology applications which are unique to atomic force microscopes are shown below.

Atomic force microscopes are the only microscopes capable of imaging bio-molecules in ambient air as well as liquids. 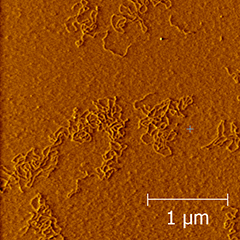 Imaging of oligonucleotides such as these can be used in a wide variety of applications, notably in structural studies, and in the study of interactions between the oligonucleotides and other molecules, such as enzymes. 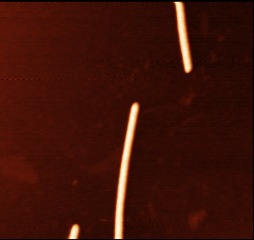 Imaging of viruses is commonly carried out in structural studies. In addition, TMV is commonly used as an imaging standard since it has a highly conserved structure. Imaging high aspect ratio samples such as these also helps to characterize tip sharpness.

Such high resolution imaging requires an instrument noise floor of less than 0.1nm, a good tip approach leading to the maintenance of a sharp tip, the capability to scan with very light forces, and placement of the microscope in an environment with minimal structural and acoustic vibrations.

Atomic force microscopy has a particular advantage over electron microscopy, in that cells and biomaterials can be imaged in partially or totally hydrated conditions including ambient air and liquid environments. 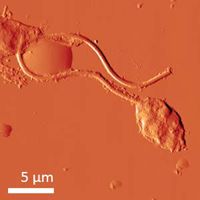 These Leishmania cells have been treated with an antimicrobial peptide, leading to highly roughened cell membranes, which can be measured and quantified by AFM.

32 µm x 32 µm image of epithelial cells measured in liquid with an AFMWorkshop Dunk and Scan.

Measurement of high resolution images of cells in liquid (e.g., under physiological conditions) is another possibility unique to AFM, and can give much more relevant results than electron microscopy, which requires cell fixation, leading to artifacts. 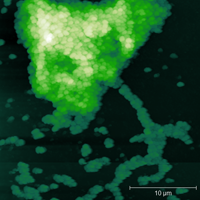 The ability to image a very large number of cells, such as these spores, allows the researcher to obtain statistically relevant information about a population of cells. Images of multiple cells can be also useful to assess inter-cellular effects, such as clustering and adhesion.

Imaging cells in combination with an inverted optical microscope

The inverted optical microscope facilitates direct placement of the probe on an area of interest for scanning. Additionally the inverted microscope can be operated in epifluorescence mode. 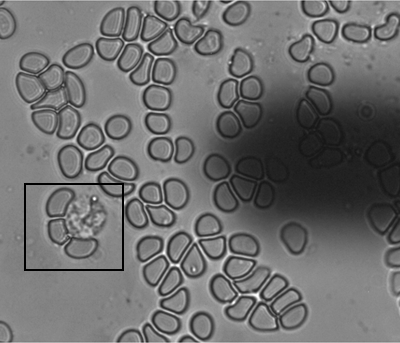 Inverted optical microscope image of neutrophil A cells. The dotted outline is the area scanned with the AFM. 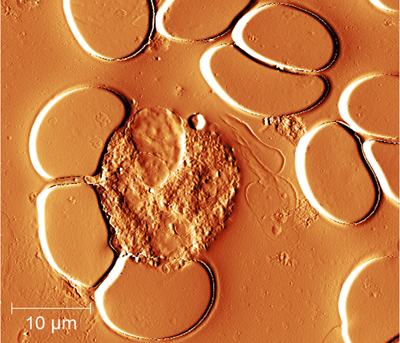 Light Shaded AFM image of the cells visualized in the optical microscope image. 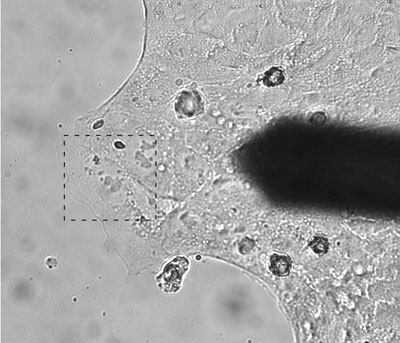 Inverted optical microscope image of Caco-2 cells in the LS-AFM. Clearly visible is the AFM cantilever on the right side of the image. A box identifies the area for AFM scanning. 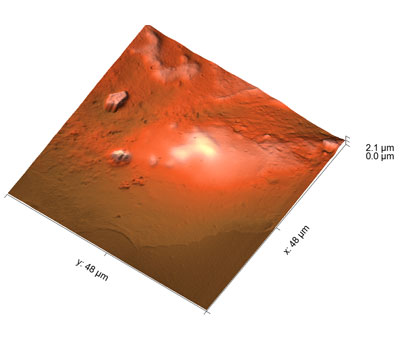 Measuring Stiffness of Biomaterials at the Nanoscale

Monitoring the deflection of a cantilever as it is pushed against a sample results in a force/distance curve. From the force distance curve many parameters may be measured, such as stiffness of the sample and probe-sample adhesion.

In biological samples, the most common application is measurement of intermolecular forces. For example, this could be used to measure the interaction force between an antigen and an antibody directly. Cell-cell adhesion forces and cellular stiffness can also be measured. 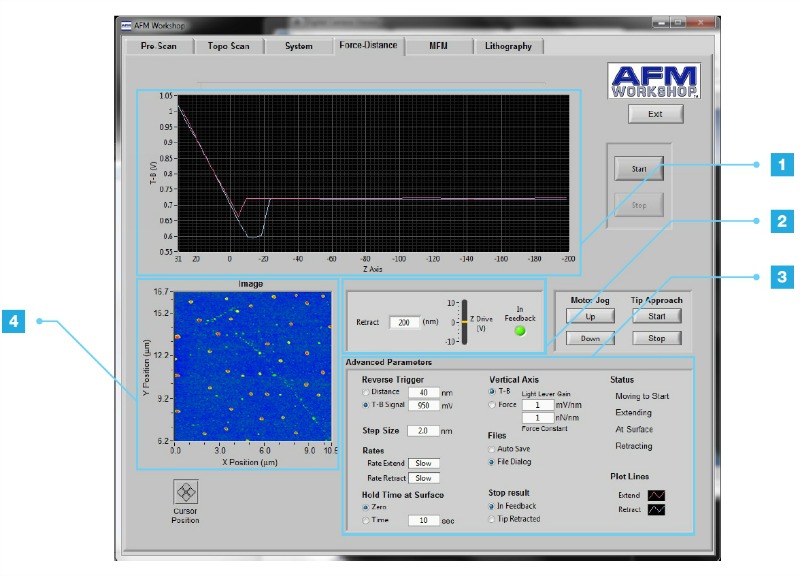