What is the resolution of an Atomic Force Microscope?

Scientists and engineers that are learning about atomic force microscopes (AFM) for the first time often ask: What is the resolution of an AFM? This is a reasonable question to ask, especially for those with experience using traditional microscopes, such as optical or electron microscopes. In these types, the resolution gives a defined value for performance of the microscope; furthermore, there is a clear definition of resolution. For optical and electron microscopes, resolution is defined as the shortest distance between two points on a specimen that can still be distinguished by the observer or camera system as separate entities. Two-dimensional resolution standards that are used to demonstrate resolution are readily available for these traditional microscopes.

Figure 1:
In traditional microscopes, resolution is defined by the shortest distance “d” between two points on a specimen that can be differentiated. 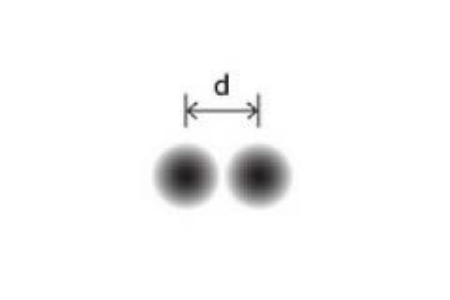 Unfortunately, there is no simple definition of resolution in an AFM that gives a clear understanding of what is measurable. This is because AFMs make three-dimensional measurements, not two-dimensional measurements like optical and electron microscopes. In an AFM, the resolution has different values for the vertical (Z) and horizontal (XY) axes. Resolution in each axis can be defined as:

Figure 2:
The Z noise floor is measured in an AFM by putting the probe in “feedback” and monitoring probe motion as a function of time. 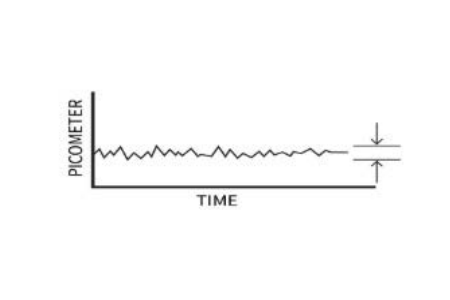 When only considering the horizontal axis, the definition of resolution is very similar to the definition used for optical and electron microscopes. That is the shortest distance between two points on a specimen that can still be distinguished by the observer or camera system as separate entities. Of course, the primary consideration in establishing horizontal resolution is the diameter of the probe.

Figure 3:
In the vertical axis, AFM resolution can be defined as the shortest distance between two points that can be differentiated, which is very similar to the definition in traditional microscopes. 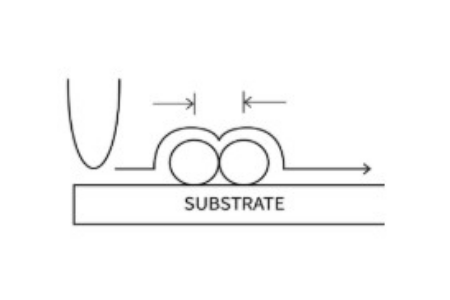 Establishing independent definitions for resolution in the horizontal and vertical axes does not accurately reflect what an AFM is capable of measuring. This is because AFM images are three-dimensional and each display pixel in the image has a vertical and horizontal component. As an example, in the figure below, the resolution of the microscope in the horizontal and vertical dimensions would not accurately reflect the smallest feature that can be measured.

Figure 4a:
In this case, the large probe cannot reach the bottom of the trenches on the surface. However, the two features can be differentiated by the AFM probe. 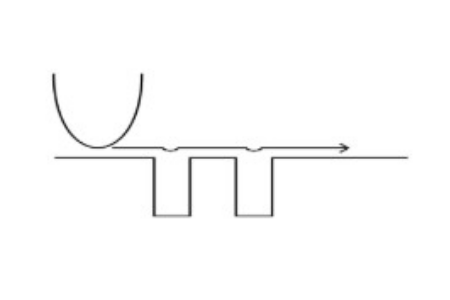 Figure 4b:
In this case, a probe with a small profile is able to reach the bottom of the trenches, showing resolution in both the vertical and horizontal axes. 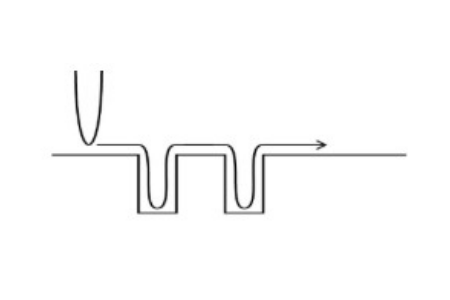 As traditional definitions of resolution do not accurately define the smallest measurements possible with an AFM, the resolution of an AFM is typically given by the minimum motion that can be controlled and measured in the X-, Y-, and Z-axis. This definition of resolution is independent of the probe that is used.

To understand what you can measure with an AFM, you need to know both the microscopes resolution as defined by the minimum controllable distances and the geometry of the probe used for the measurement.

Download "What is the resolution of an Atomic Force Microscope?"