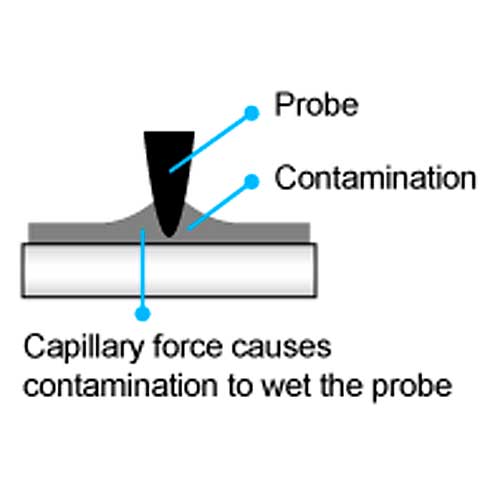 Conceptually, an atomic force microscope is a simple instrument. A probe is scanned over a surface, and by monitoring the motion of the probe with a photodetector, a surface topogram is measured. From this, images and data characterizing the surface can be obtained. Although an AFM is a simple device, there are a few common mistakes that new operators make that can lead to great frustration.

Often these common issues result in new AFM operators concluding the AFM itself is faulty. In the next several newsletters themed "AFM Tips", we will discuss these problems, their cause, and their solution. Being aware of these issues will give you a better understanding of the AFM, and make for less stressful scanning. In this newsletter, we discuss the common issue of false feedback.

AFM Tips: How to deal with "false feedback"

In vibrating (tapping) mode, a reduction in vibration amplitude is measured; in non-vibrating (contact) mode, the deflection of the cantilever is measured. Ideally, tip approach is completed when the probe interacts with the "hard" forces associated with the surface. As we will see, the automated tip approach can be "tricked" into thinking it is in feedback (in contact/interacting with) with the surface, which is called false feedback.

The probe can become trapped in the contamination layer before interacting with the hard surface forces of the sample. It is important to notice the difference. The AFM software can be tricked into thinking it is in feedback with the surface, resulting in the automated tip approach being stopped. False feedback due to surface contamination results in the scanned image looking blurry, and nanoscopic features cannot be visualized.

The magnitude of the change and its effects depends on the stiffness of the cantilever as well as the amount of surface charge present. This problem is common when soft cantilevers are used in non-vibrating mode.