Why AFMs need to be calibrated

All microscopes need to be calibrated in order to produce accurate results. One of the advantages of AFM is that unlike an optical microscope, that usually has a fixed set of magnifications that can be used, the AFM can produce images at a very wide range of scales. The user chooses the X-T scale to be imaged base d on what information they wish to extract from their sample. Since it's a three-dimensional microscope, the AFM also measures the sample dimension I the z-scale, using the feedback mechanism and the z piezo to measure the height of the features in the sample. In order to do this, the AFM software uses a set of calibration values, that relate the voltage applied to the piezoelectrics in the scanner, to real distances. In the AFM workshop software, there are either three or four of these values, depending on the scanner used. The software allows the user to update these values in order to allow re-calibration of the scanner movement. When the instrument is installed, the scanner comes pre-calibrated based against internal standards, so the instrument will be making accurate measurements from the first scan, but there are two reasons when the user would want to re-calibrate the instrument.

The first reason that re-calibration of AFM instruments is necessary to carry out, is that the piezoelectric actuator in AFM scanners often change their response over time. In general, this is a slow response, especially once the instrument has been in use a few months. However, it is, in general, a good idea to recalibrate an AFM on an annual basis. The second reason for calibration is that piezo-electric response to voltage is non-linear. In other words, the number of nanometers that a piezoelectric actuator moves per applied volt will not be the same when measuring very large samples, compared to when measuring very small samples. This is important for AFM in particular, because AFM instruments are capable of measuring on a very wide range of scales. The non-linearity of the piezo extension is illustrated schematically below. 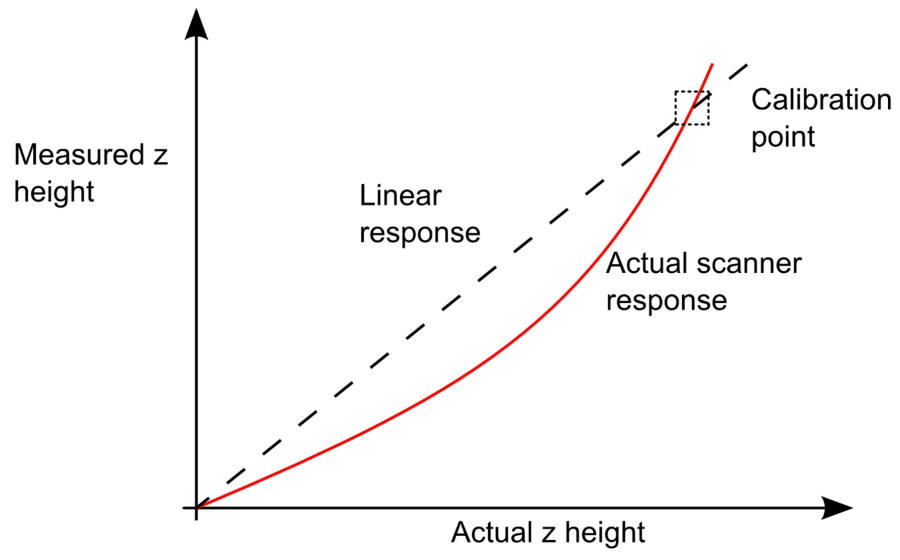 Figure 1. Illustration of the non-linear behavior of a piezo electric transducer. The non-linearity has been exaggerated for clarity.

As can be seen in the image shown above, calibration accuracy depends on the specific height at which calibration has been carried out. In fact, the response of piezo stacks such as used in AFM scanner sis considerably more linear than is shown in figure 1. However, the point still remains. For superior accuracy in measurements made with an AFM, it is useful ensure the scanner calibration is accurately calibrated at a scale similar to that at which the measurements will be made.

How AFMs are calibrated

Calibration of an AFM scanner can be carried out in X, Y, and Z axes. X and y axis calibration is usually measured by measuring the repeat distances, known as pitch, of regular repeating patterns in X and XY. It is usually made at the micron, to 10s of microns scale. For example, for a scanner with 100 x100 scan range in X and Y, features with a 10 micron pitch would usually be used. For a 15 micron scanner features with pitch between 1 and 3 microns would normally y be used. In general, the accuracy of calibration in the Z axis is considered more important than accuracy of X-Y calibration. This is because X’Y measurements are typically subject to errors related to the probe size. On the other hand, z axis measurements can be expected to be absolutely accurate in an AFM. For this reason, if possible, critical dimensional measurements are made in the Z axis. Measurements of large features in the X- Y axis can also be made much more accurate by using the position sensors of the AFM and operating in closed-loop mode. Position sensors can also be used in the Z axis. AFMWorkshop scanners with 50 and 100 microns ranges have Z axis sensors incorporated, which improves the accuracy of Z measurements. However, this method is not appropriate for 2 dimensional materials, as the noise in the position sensors is greater than the noise in the standard height measurement, and thus it’s necessary to make a calibration on the nanometer scale for the z axis.

A wide variety of samples can be used for dimensional calibration. For x-y dimensions, the most commonly used are purpose-designed semiconductor grid samples. These samples typically have a square grid of repeating patterns, such as holes or pillars, although sometimes they have patterns in lines. These samples are easy to use, especially since there is usually a large area that can be used, which all shows the desired features. They can be found with a range of repeat pitch, most commonly between 1 and 10 pm. Other possible samples for X-Y calibration include TEM grids, or replicas thereof, and self-assembled nanospheres.

For z-calibration, it is also common to sue semiconductor devices as standards. There are a very wide range of such standards available. Typically, they show well-defined step heights, most commonly in the range of 100 to 1000 nm. Other possibilities include measuring the height of monodisperse colloid particles, but these have some disadvantages, including the fact that the accuracy of AFM is greater than the dispersion of sizes in nearly all samples.

For z-calibration at a scale relevant to two dimensional materials, probably the best option is to use a well-characterized layered material displaying steps of known height. There are a few of these available from different suppliers, made from different materials. One useful example of a layered material particularly useful for this procedure is the 6H polymorph of silicon carbide (SiC), which can be prepared in order to display either half or one monolayer steps across its surface, which correspond to heights of 0.75 or 1.5 nm, respectively. 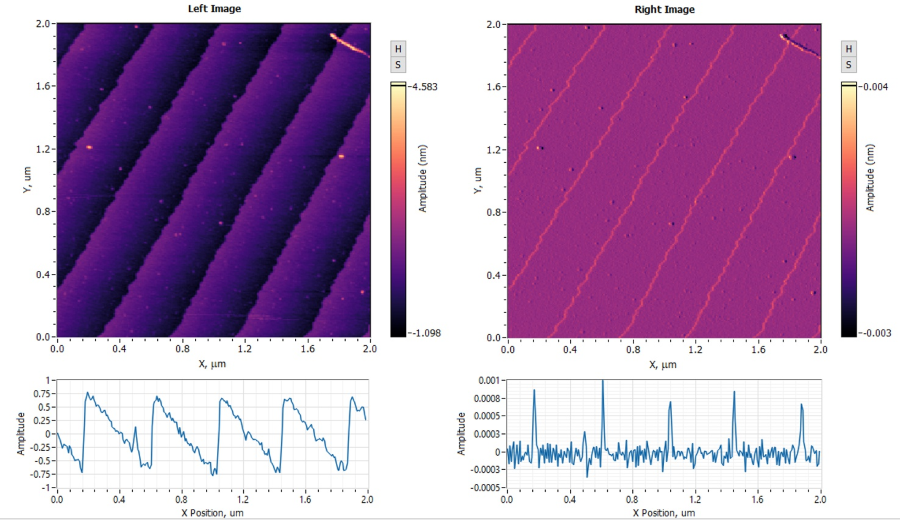 Figure 2. AFM image of small area as shown in the AFMWorkshop control software. 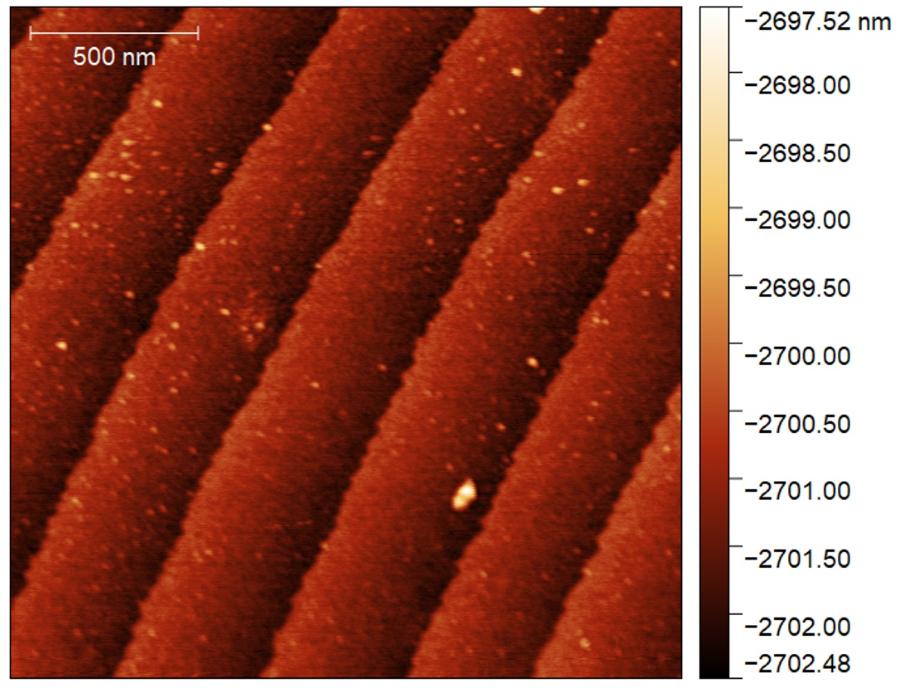 Figure 3. Preprocessed image of steps on SiC sample. The image is flat overall, but he terraces are tilted. 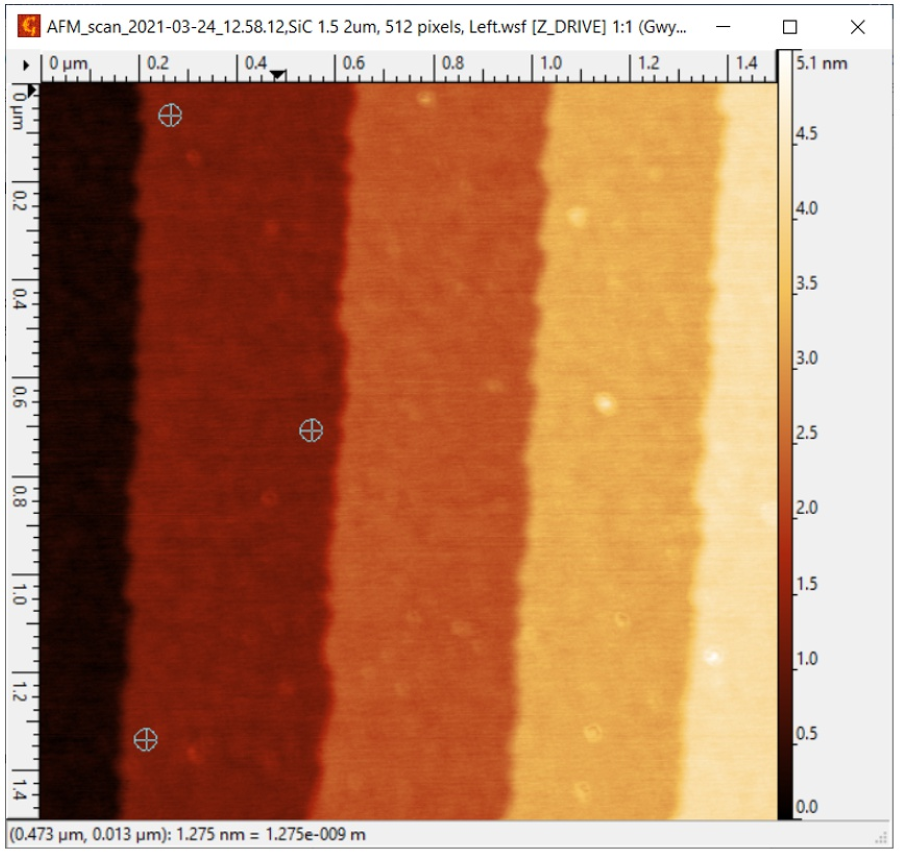 Figure 4. Levelling the terraces using the Three Point Level method. All three points must be placed on the same terrace, preferably far apart, as shown here. Having done, this, the terraces are flattened. Compare to Figure 3. 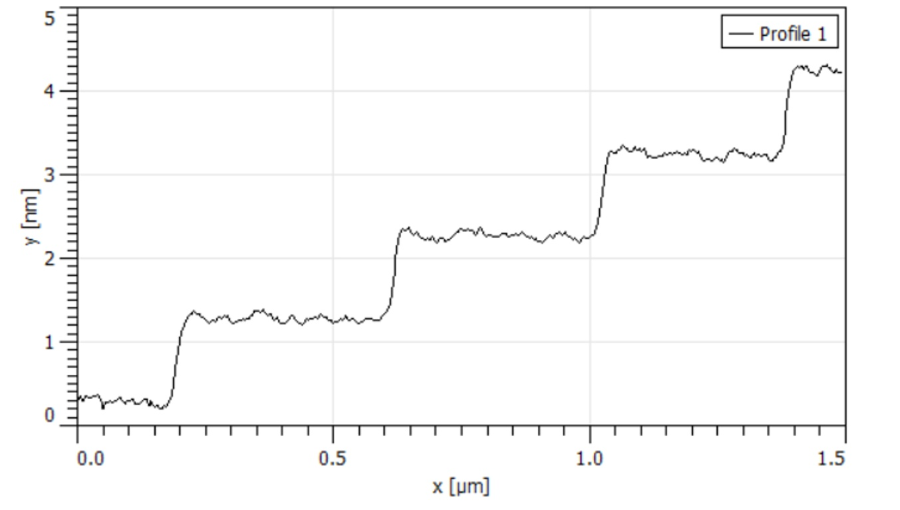 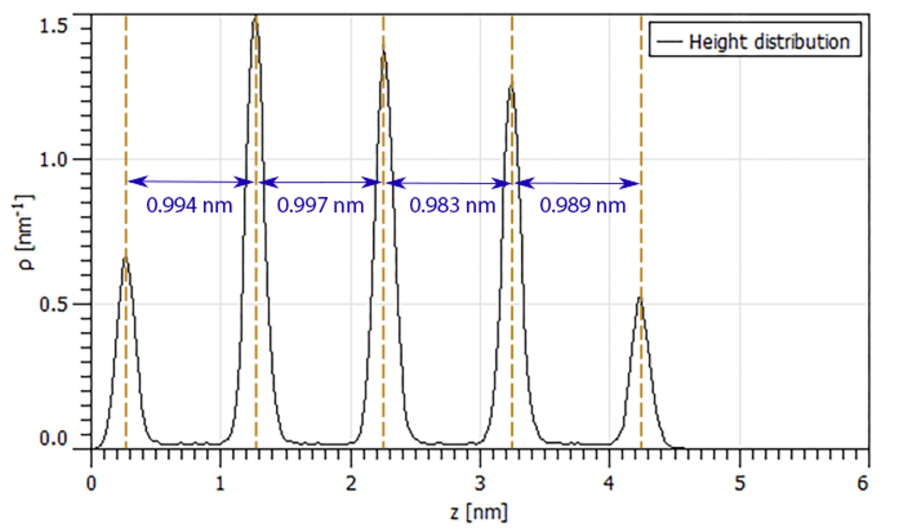 Figure 6. Histogram of the image shown in figure 4, showing the height difference between the steps in the image was 0.99nm

Figure 7. Image of SiC 1.5 Sample and height histogram after recalibration

The result found is shown below.

Figure 8. Image and histogram obtained from the SiC0.75 sample, after recalibrating based on the SiC1.5 sample.

The average step height found on the SiC0.75 sample, using the calibration from the 1.5 sample was 0.758 nm. Therefore, we can say that this system is now suitable to give measurements to within a 2% accuracy at <2nm size scales.

In order to determine how calibration at the 1nm size scale affects the determination of dimension at larger scale, we can use these calibration values to measure a 100 nm calibration sample. This gives as idea of the level of non-linearity in the piezo response. Upon doing this, we found that the measure values were 13% off the actual values at around 100 nm. The error of 13 % can be considered small, given that we are increasing in scale by two orders of magnitude. Thus, there is a small, but significant error. When using calibration values determined using distances far from the values measured.

Overall, considering the agreement found between the two SiC samples measured here, we can say that the AFM calibrated using this calibration method is suitable to give accurate measurements in the sub-nanometer to few-nanometer range, and thus highly suitable for measuring 2D materials. Furthermore, although non-linear, the agreement between calibrations at 1nm and 100 nm is not too far off. However, it is always to recommended to calibrate Z axis measurements at a spatial scale relevant to the those of critical measurements.