The best AFMWorkshop publication citings of 2017 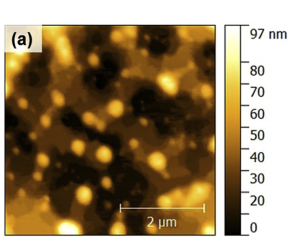 At AFM Workshop, our goal is to provide researchers, innovators, and educators with high quality atomic force microscopes (AFM) while maintaining an affordable price point. Our AFMs are equipped with everything one would require to generate high-resolution AFM scans for the visualization as well as measurement of nanostructures, both of which are often used in academic publications.

This month, we are highlighting some of our favorite customer publications from 2017. Throughout a great variety of applications, ranging from the food industry to nanomaterials, AFM Workshop’s AFMs have provided researchers the tools necessary for capturing high resolution scans for their publications.

AFM Workshop’s line of AFMs is geared to meet your specific research needs and we will even work with you to make modifications so that you can reach your research goals. To learn more about what an AFM from AFM Workshop can do for you, take a look at our applications page here.

Since the company’s inception in 2010, AFM Workshop’s AFMs have been increasingly cited with our customers working in over 200 labs across the globe. To showcase their hard work, we have put together a brief sampling of the successful research performed using our AFMs in 2017.

In Singapore, Dr. Hongshun Yang is currently working on an eggless cake batter suitable for vegetarians. The team used AFM Workshop’s TT AFM to measure nanostructures in the batter and cake in order to better understand how the ingredients aggregate to create the desired texture. To replace eggs, Yang and his team had to find a substitute that would have the same effect as eggs at the nanoscale, which would give rise to a similarly textured and tasting eggless cake.

In California, Maria Vomero is creating in vitro electrode interfaces using glassy carbon (GC) for recording and stimulating brain activity. The team compared GC interfaces using traditional Platinum (Pt) electrodes, with a particular focus on long-term stability. To do this, they used the TT AFM to measure the roughness of the electrodes at the nanoscale, as well as for imaging scans to be used in their publication.

In India, Shubhadeep Pal is developing a process for the synthesis of luminescent quantum dots (QDs). They present a single-step process for the large-scale synthesis of single- and few-layered QDs by temperature-assisted shear exfoliation. The team used AFM Workshop’s SA AFM to indicate how many layers are present in a given concentration of QDs, an important aspect for luminescent materials.

The list of publications as well as applications goes on and on. To see a comprehensive list of our publications, click here. We love to highlight the success of our customers, so let us know if you want us to showcase your work! Just contact us here.

At the National University of Singapore, Dr. Hongshun Yang’s team is working on the development of eggless cake batter that appeals to health and vegetarian communities. The idea is to create a cake with the same texture and taste as a traditional cake, just without eggs.

Yang’s team evaluated multiple egg substitutes, including isolated pea proteins, soybean protein isolates, emulsifiers, and plant polysaccharides. Properties of both the batter and the final cake products, including volume, texture, color, moisture, and microstructures were evaluated as well as compared to traditional cakes baked with eggs. The goal was to mimic the structural properties of glutens, namely gliadin and glutenin, found in traditional cakes made with eggs.

These physical attributes are likely derived from structural changes at the molecular level, therefore many studies have used Fourier-transform infrared (FTIR) to analyse structural alterations. However, atomic force microscopy is a new addition to structural analysis of food. Operable in ambient conditions and lacking complicated sample pre-treatment, AFM is a convenient as well as non-destructive analytical approach.

After trying a number of different recipes, the group found that replacing eggs with a soy protein isolate along with 1% mono- and diglycerides (Fig 2e) yielded a similar specific volume, specific gravity, firmness, and moisture content as cakes made with eggs. For this assessment, they used AFM Workshop’s TT AFM to analyse the structure and size distribution of gliadin and glutenin, and compared it to traditional cakes (See Fig 2c). 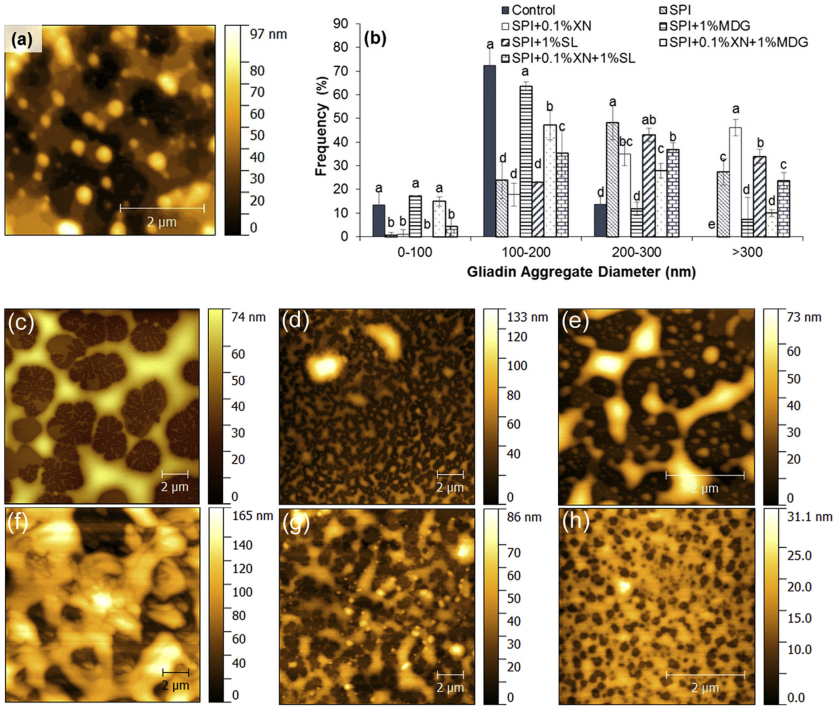 In another recipe, the team combined isolated pea proteins, 0.1% xanthan gum, and 1% soy lecithin and found this to be similar to the control traditional cakes baked with eggs in terms of specific gravity, crumb color, and crumb pore properties. Furthermore, the nanostructure of glutenins was also a close match using this recipe as can be seen by comparing AFM images in Fig 5a (traditional) to Fig 5d (eggless).

AFM gave researchers a more visualized understanding of the conformations of glutenins and gliadins. By using AFM images and data to compare the nanostructures of batters and cakes from various eggless recipes, the researchers found that both of these recipes should be considered candidates as egg substitutes in cakes. 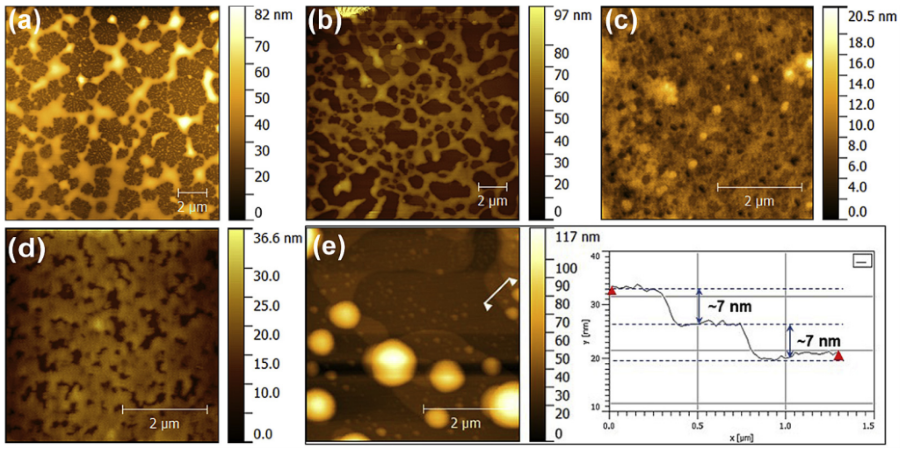 In California, researchers at San Diego State University developed a new electrode material fabricated from lithographically patterned glassy carbon for use as an implantable neural interface. Glassy carbon (GC) is an attractive new material for use in neural recording and stimulation due to its good electrical and electrochemical properties as well as its ability to be fabricated into a variety of geometries.

GC has only recently been considered for such use due to new enabling technologies that allow the pattern transfer and integration of GC electrodes into thin-film polymeric substrates, such as those used for neural prosthetics. Devices fabricated from ultra-flexible thin-film polymer substrates reduce device/tissue mismatch, thus lessening inflammatory responses and extending the lifetime of the implantable neural prosthetic.

Maria Vomero reports a neural prostheses fabricated with GC electrodes housed in an ultra-flexible thin-film polyimide substrate. Polyimide has been reported to have greater adhesion to carbon based materials (such as GC) compared to traditionally used noble metals, including Platinum (Pt), therefore making it a better fit for GC electrodes.

Vomero and her team compared for the first time the biocompatibility, electrochemical properties, and in vivo performance of thin-film microelectrode arrays (MEAs) fabricated with either GC or Pt, with a particular focus on the long-term stability of these devices. To perform this comparison, AFM Workshop’s TT AFM was used to capture optical imaging scans and collect roughness data of the two different electrodes. 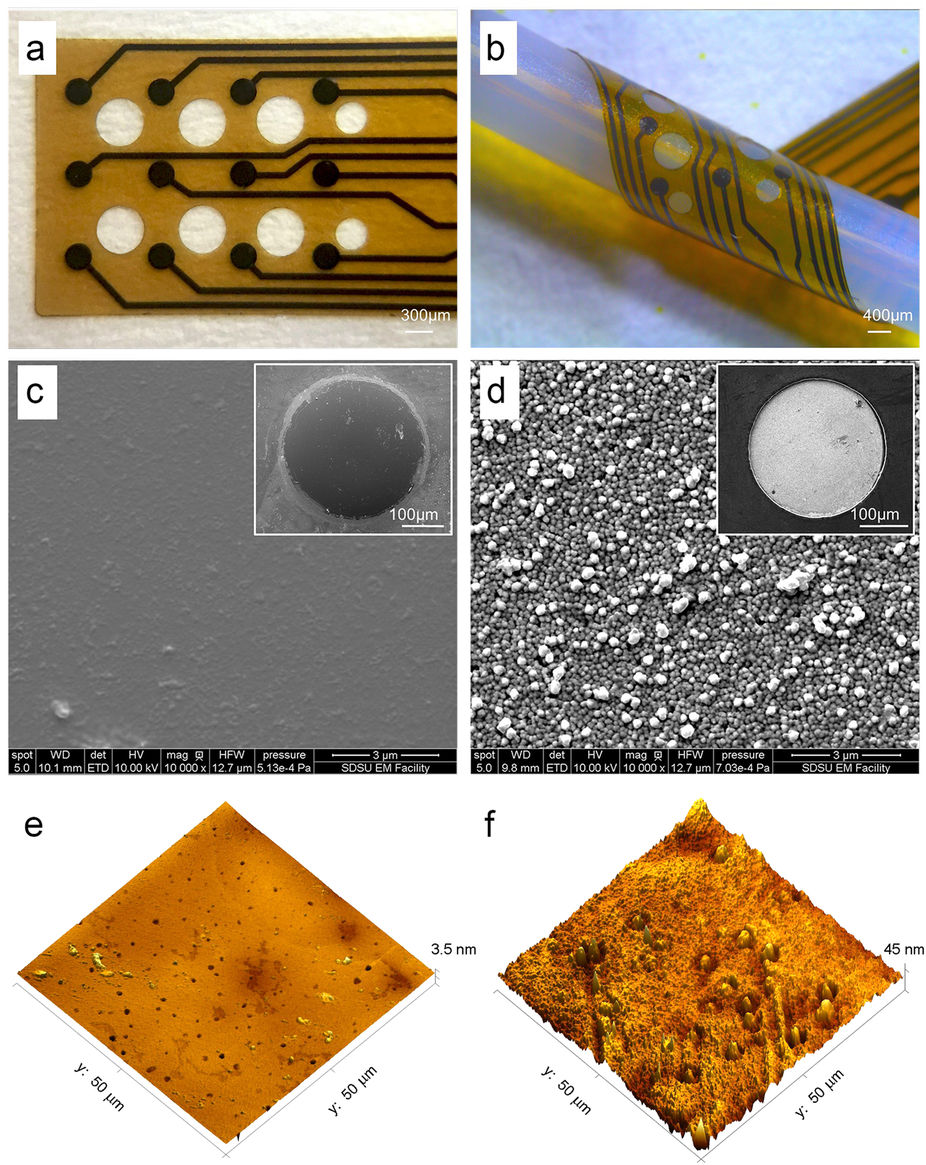 As shown in Fig 1, GC electrodes were shown to have a very homogeneous surface with a mean surface roughness of 3.3 nm, while Pt electrodes had a mean roughness of an order of magnitude higher. Furthermore, the team demonstrated that GC electrodes possessed superior electrical and electrochemical properties compared to devices made with Pt. This makes them promising candidates for use in neural applications.

In vivo tests further confirmed that measured impedance values of GC microelectrodes were lower than those made with Pt. Furthermore, high-quality neural signals were recorded with greater signal-to-noise ratio. These new microelectrodes open up the possibility for improved sensitivity, spatial selectivity, and spatial resolution in micro electrocorticography (ECoG) arrays for both brain recordings and stimulating applications.

At the Tata Institute of Fundamental Research (TIFR) in India, researchers are working on a novel single-step process for the large-scale production of luminescent quantum dots (QDs) of layered materials using a temperature-assisted shear exfoliation method. Specifically, the team demonstrated the syntheses of molybdenum disulfide (MoS2) and tungsten disulfide (WS2) QDs.

In this work, led by Shubhadeep Pal, researchers employed a modified shear exfoliation process which results in a large-scale production of monodispersed luminescent QDs of MoS2 and WS2. AFM measurements were conducted using AFM Workshop’s SA AFM in the non-contact mode to find the thickness of the QDs, which indicated how many layers were present (Fig S5). 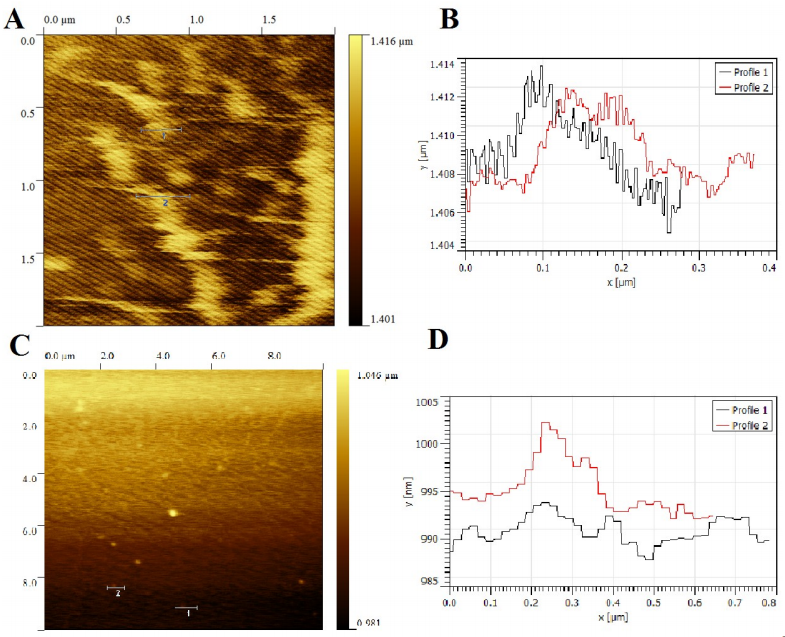 Fig. S5. AFM images of images of MoS2 and WS2 QDs (A and C) and the corresponding height profiles (B and D).