Atomic Force Microscopes are key tools in researching the mechanical and structural properties of materials.

Researchers want to manipulate superconducting materials further by writing or fabricating nanostructures made of superconducting materials. Current methods to write small-scale features, such as nanolithography, are typically inflexible and complicated. In this study, the authors describe a direct-write approach that is more simple and involves the use of focused, electron beam induced deposition. This method can write 3D patterns with high resolution. The authors used an AFMWorkshop TT AFM operating in vibrating mode to characterize the superconducting nanostructures they fabricated.

Modern digital integrated circuits are based on a process technology that uses metal-oxide-semiconductor field effect transistors (MOSFET), a type of transistor used for amplifying or switching electronic signals. Partly in attempts to reduce materials materials and manufacturing costs, and partly in response to a push for environmentally friendly electronic materials, organic field effect transistors (OFET) have emerged as a transistor that instead uses an organic semiconductor. OFETs typically use pi-conjugated molecules as the active semiconducting layer. In this work, the authors have fabricated OFETs from a new set of building blocks that exhibit excellent charge transport properties. They characterize thin films made of these building blocks with an AFMWorkshop TT AFM operating in contact mode to examine the structures formed by their different small molecule candidates. 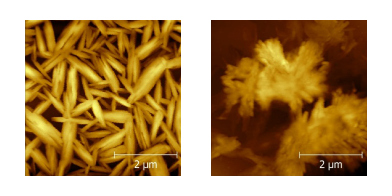 Fuel cells have attracted a lot of attention as devices that generate energy with high energy-conversion efficiency, are environmentally friendly, and offer high energy density. There are several types of fuel cells including the popular solid oxide fuel cell (SOFC) that converts hydrocarbon fuels into electricity. Because SOFCs are typically operated at very high temperatures, their applicability and use to date has been limited.

In this work, the authors try a strategy to lower the operating temperature of the SOFC by introducing an interlayer made of gadolinia-doped ceria (GDC) between a platinum cathode and yttria-stabilized zirconia (YSZ) pellet. They study the effect of interlayer thickness on the performance of the SOFC, observing that device performance improved as the GDC interlayer thickness was increased to 100nm. Using an AFMWorkshop TT AFM operating in contact mode, they studied and quantified the roughness of the different GDC layers, yielding important insights into the ultimate performance of the SOFC. Shown below are their images of the 50nm (left) and 100nm (right) thick layers of the GDC, showing that the 50nm thick GDC film was rougher and did not fully cover the surface of the YSZ pellet as the smoother, fuller 100nm thick GDC film that resulted in poorer performance.

50nm (L) and 100nm (R) thick layers of the GDC, showing 50nm thick GDC film was rougher and did not fully cover the surface of the YSZ pellet as the smoother, fuller 100nm thick GDC film that resulted in poorer performance.