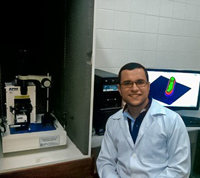 Researchers from Brazil have been using the TT-AFM from AFMWorkshop to study tropical diseases. Recently published in the journal Nanomedicine: Nanotechnology, Biology and Medicine, the researchers studied the ability of a bioactive peptide isolated from the skin secretion from a tropical frog (Genus Phyllomedusa) to act on membranes of the parasite Leishmania.

Visceral leishmaniasis, also known as kala-azar, is the most severe form of leishmaniasis. Leishmaniasis is a disease caused by protozoan parasites of the Leishmania genus. This disease is the second-largest parasitic killer in the world (after malaria), responsible for 200,000 to 400,000 new infections each year. It is one of the most important parasite-caused diseases in the world, mostly affecting people in tropical climates.

The images from the TT-AFM below show the morphology of flagellated cells of Leishmania infantum, the causative parasite of leishmaniasis, with and without treatment of the peptide called DRS-01(Figure 1). These changes could be quantified at the nanometer scale, thus changes caused by this peptide could be measured as a function of concentration. The researchers also used electron microscopy, but found that more details of the molecule's action could be observed using the AFM.

Figure 1: Leishmania cells before and after treatment with the peptide isolated from an amphibian.

Dr. José Roberto Leite said "The images are fantastic, and this would not have been possible without the AFM equipment from AFMWorkshop." He added, "I worked with the instrument for only one week and acquired all the AFM results we needed for the paper we published". While Dr. Leite used a colleague's TT-AFM in Portugal to produce his original research, he was so impressed with the capabilities of the instrument that he purchased a TT-AFM for his own lab in Brazil.

Dr. Leite told us that the Brazilian group acquired their new TT-AFM to maintain continuity of research involving natural products found in the wild in Brazil. They are studying the action of these natural molecules against pathogenic bacteria and other pathogens. In his Biotec group, the instrument is also being used by a dentist specializing in pharmacology, demonstrating the versatility of the technique and its multidisciplinary approach. The instrument is also being used in teaching activities and in other research projects.

The work was carried out by the Biotec (Center for Biodiversity Research and Biotechnology) research group in the city of Parnaíba Northeastern Brazil, and in partnership with researchers from the Requimte lab, University of Porto, Portugal. The publication of this work is available online.